Author of the saga Interfeel, TikTokeur and speaker in schools, Antonin Atger has more than one string on his bow. We went to meet a young writer from Lyon who talked about the life of the author and the mechanisms that need to be adopted in this profession, all with a dose of humor. Inspired by his travels and studies of political science, he offers us three volumes for young people, rich in twists, creativity and thinking.

How did writing come to you?

It comes from a young age. In fact, I was pretty lonely then and when you write, you don’t need anyone else. We have a pen, paper or computer, and that’s it. There was also the idea that it was a way to stand out. Today, it helps me tell stories and make people think. That’s really an aspect I really like: looking for stories with twists, uncertainty, emotions. It’s a great way to get people interested in things they wouldn’t pay attention to if there was no story about it. So, here’s what I love about writing is that we can combine emotions with reflection, as we create the universe and make our imagination work. I used to mostly shoot thrillers; I imagine crafts and constantly surprise the reader, a bit like Agatha Christie, I really like that.

Besides, that’s what you do in Interfeel ?

They often ask me about the influences that inspired me to write Interfeel, I mostly think of thrillers. That is, I take the plot of the thriller and put it in the universe of science fiction. And besides, people who aren’t exactly science fiction-oriented aren’t lost by reading Interfeel ; yet it is a fairly realistic universe.

That’s right, can you refer us Interfeel ?

So inside Interfeel, I imagine a new social network that allows you to share your emotions. We all have a chip in our left ear, through which we feel other people’s emotions. This has a lot of very concrete consequences: we talk a lot less, there is less facial expression and, from a social point of view, there is less discrimination, more empathy and more tolerance. It is a very peaceful society. The downside is that if we disconnect from the network, people leave us aside because they wonder why we no longer share our emotions, if we hide something, if we want to attack them … So everyone feels obligated to stay connected to Interfeel. And in this somewhat dystopian world is our hero, Nathan, who is 16 years old and has always lived with Interfeel. It is normal for him to be connected to the network. Except that one day his philosophy teacher will jump out the window in front of his eyes and Nathan won’t feel anything. From there, he will say to himself: “This is not normal, I should feel something about this. There is something wrong with my emotions, and something is wrong with Interfeel. “He will start researching and that’s how the story begins.

What is the message you wanted to convey through this saga?

Er … Can you love the story when all the characters die in the end? (Laughter) No, that’s not true. My main message is that technology, like everything else, is more complex than right or wrong. And that’s okay, that’s what makes it interesting. Basically, in that 1 of Interfeel, there is an idea that Interfeel is not good, even if it is a little more nuanced in the end. In those 2 and 3, I will show many examples where Interfeel is very, very good. In Volume 4, I said to myself, “But what do we do now? if we remove Interfeel, we will lose good things. But if we keep Interfeel, we will keep bad things. ” And finally, it works for everyone: for example, I’m pretty critical of social media, and yet I’m on it; because in the end there are useful things, and many good things that come out of it. 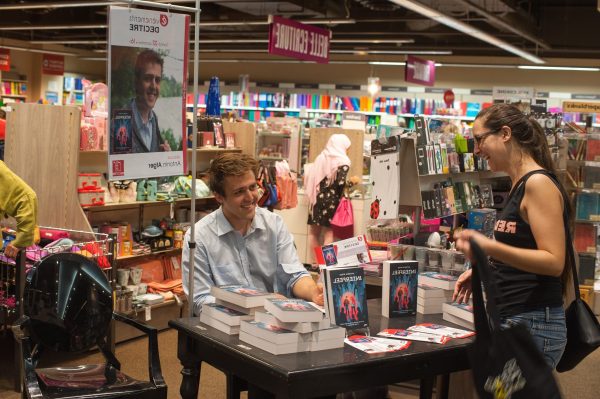 You have a TikTok account – which already has almost 100,000 followers – on which you give writing tips. Where did you get the idea to create this account?

There were a lot of things, the first was that we were in complete prison, so I was bored. I started 1er November 2020, I think, and I said to myself, “Well, this could be good, I have a new cell phone, and if I tried some things?” In the beginning, I had 20 subscribers for a few weeks, and then I suddenly climbed to 2,000 subscribers, which was already exceptional at the time. Now I’m planning a lot more, and that’s great! After the interest, it was both to introduce myself and to publish Interfeel. I also needed to develop my writing practice, and it worked out pretty well. And the third thing is that people like it, they care. This makes them feel guilty about writing. I think a lot of people think they don’t have that level. Writing takes work, but honestly, I think everyone can do it. In France, there is a prejudice that says about elected officials: you either have talent or you don’t. But that is not true. Like everything, it works.

Is there a routine to adopt to write a book? For example, do you carefully apply the tips you give to your TickTok account?

(laughter) It is true that I give a lot of advice on TikTok that I do not necessarily apply. For example, I should write every day, but I don’t always do that. But what is interesting is that I rationalize my way of writing, which used to be very intuitive, because I never attended writing classes. For example, at one point I said to myself “but how can we make sure we have motivation? »And I realized I was changing places to be remotivated. In fact, you have to change the parameter: change the medium, location, music, room … So in the end it’s very good. I don’t just give advice without it affecting me. When I started writing tips, my goal was to give one a day for a year. At the start, I obviously didn’t have 365 in mind, but I fed myself. I think I was 30 or 40 and it got me into the way of thinking that as soon as I read something, or saw something, I had a corner of my brain that said “what can you get out of giving advice on writing?”. had a very pragmatic approach to it.And I think that’s why I give a lot of examples, manga, etc., concrete things.The idea is not to come and say “I know”, but “here’s how it works specifically”.

You recently continued your studies in psychology. Do you think this has influenced your way of writing?

Good question … In the end, I would say the opposite happened. At first I kind of thought that when a hero had a trauma when he was little, it must have affected his whole life. In fact, when we study psychology, we realize that it is more complex than that. Traumatic events exist, of course, but the personality eventually remains fairly stable. For example, if a person is quite smiling, he will not stop smiling for the rest of his life if he experiences a tragic event. So I realized that I had to stop putting one causal explanation for the course of action. Now it seems important to me to show that personality is complex in several aspects. It helped me to have more nuances and more freedom about how the character can feel despite what he went through. 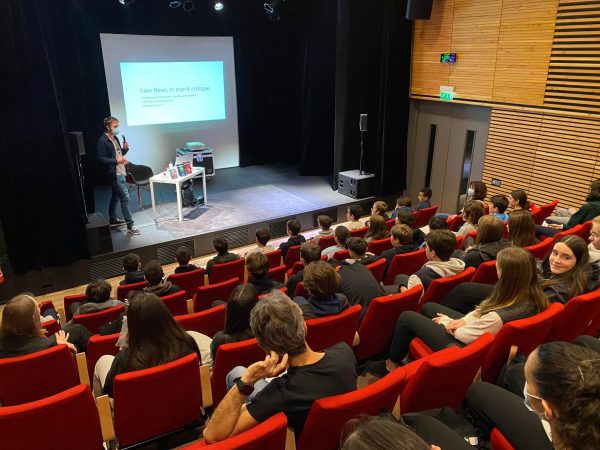 Specifically, what is the life of an author?

Cocaine, planes, bribes … (laughter). No, in fact, the strength and flaw of authorial work is that no one tells us what to do, so that means that if we do nothing, we have nothing. I will say things that are not super glamorous, but I think you need a lot of self-discipline, writing a little bit every day … Even if you don’t have a deadline, you have to set a deadline, and you have to be kind to yourself. You don’t have to say to yourself “I’ll write 300 pages tomorrow”, because it won’t work, but you have to say to yourself “here, at the end of the week I have to finish some chapters, e.g. part, etc. ” You need to know how we work, and whether we prefer to write in the morning or better in the evening. You have to get to know yourself, and that’s the job. Sometimes it’s lonely, sometimes it’s hard. That’s why I love doing school interventions because I see people and I’m much less lonely than before! And you have to accept some uncertainties. Because when you start writing in general, you spend a year writing your book, you don’t get paid, so it’s very uncertain. So, the author’s daily life is to make sure he has enough food, to have the discipline to write and to know how to manage his time. And in my opinion, it is also for exchange with readers on the networks. Not all writers do it, but I like to do it, I think it’s important.

Will there be a 4th volume Interfeel ?

The fourth volume is very problematic because the publishing house – Pocket Jeunesse – asked me to return the manuscript at the beginning of 2021, without giving additional details. I believe I brought it back in April, and they told me “it’s not too late, it won’t come out”. It was quite violent because it is still being done, and since I had no information, I continued to write … I was allowed to work for a year and a half on this project without payment. Or very little, in full prison, so a difficult situation for authors . All this to refuse to publish me, without bothering to read me. If someone had told me the book was bad, I could understand … But hey. So Interfeel 4 is written, it ends the story, but a priori it will not come out.

Do you currently have any writing projects? Other books in preparation?

Yes, I am currently writing two books. There is a science fiction book for young people, in a way Interfeel, but on a completely different topic. And another book about what is called white literature, that is, about everything that is not genre literature.

What topics will be covered?

Well then, it’s a social media story that allows you to share your emotions … (laughter) No, more seriously, it will be a science fiction story that will include friendship, free will and aliens. Basically, people are offered a choice: either they will keep their freedom, but they are imperfect, or they will become perfect – that is, they will acquire extraordinary skills – but they will lose their freedom. The whole question is to say to yourself: what would you choose in this situation?

We will follow two friends who have sworn not to accept this agreement except that one of them will finally give in. Others will try to save their friend by trying to figure out what lies behind this market.

When can we expect this book to come out?

I would like to finish it this summer, so I will offer it to publishing houses in September. Then, it takes another year to come out; the editing process is quite long.

Where can we find you next?

At the moment, I don’t plan on signing books because I don’t have any books coming out. On the other hand, on July 6, I will be at Voreppe City Hall, near Grenoble. We will try to understand together why manga One piece works so well.